What the fuck universe? I’m tired of opening Facebook every morning at the train station and seeing someone who died. The last 30 days has been a bad time to be a celebrity, particularly if your British and I am a fan of your work.

First it was Lemmy, the Motorhead frontman who prided himself on how much he could drink and toured right up to the end, passing away from an aggressive cancer just before the new year.

Next we famously had David Bowie. When I saw it I thought it was an internet hoax, and after some frantic Googling I realized it was real and choked back tears as I sat waiting for a late train on a bitter cold Chicago morning.

Now Alan Rickman. The voice of God. The bad guy from Die Hard. The Sheriff of Nottingham. Most famously, Snape. This is a really long list, so I’ll end with that one since almost everyone but me has seen all the Harry Potter movies.

All three great. All three taken by aggressive cancer before the world was done with them.

Bowie was perhaps the biggest shock to me. As a child I remember finding the Goblin King oddly attractive. As an adult I decorated my twin’s bedroom around a Labyrinth movie poster with the Goblin King prominently looking down over them as they sleep. Through the years his music was a constant. Always pushing boundaries. Rarely making a song that wasn’t likeable, danceable, and somehow new and fresh. Bowie told us it was OK to be weird. It was OK to be different. It was totally OK to want to turn your younger siblings into goblins and become the Goblin Queen.

A sorry not sorry to my younger sister, who totally would have been made a goblin if I had the opportunity.

Motorhead was one of those bands that would have been prominently featured on a soundtrack of my 20s (which would have been a box set). From hanging out in a punk/industrial/metal bar to seeing Motorhead perform live at one of the shittiest venues in Chicago with the man I now call Husband, they were pretty much a constant. I just assumed they were immortal. Lemmy Lived a hard life with all the smoking and drinking and playing music so loud that my ears were ringing for two days after the concert. I assumed because he wasn’t already deaf and dead he’d live forever.

Movies were always a little better as soon as you knew Alan Rickman was in them. From the brilliantly evil Sheriff of Nottingham in the Kevin Costner Robin Hood movie I can’t decide if I love or hate, to the neutered voice of God in a Kevin Smith film, and his epic death in Die Hard you never got the same thing from Alan Rickman. Sure, he was a bad guy in a lot of movies, but he was a different bad guy. Since I’ve never actually seen the role he’s most known for as Professor Snape I have no opinion on that, but I can only assume he played the role brilliantly like all others. 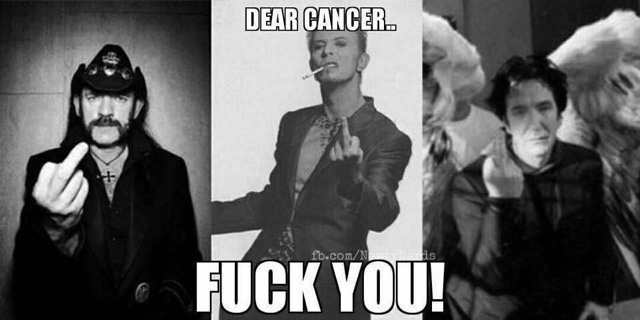 Click here to donate to the Cancer Research Institute.