March 01, 2010
There is no better feeling than finding a shoe that is so crazy, so over-the-top that no one else would wear it. At least not for a regular occasion anyway. Behold: shoes with teeth! 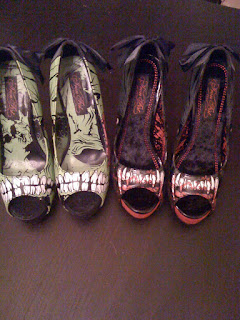 I got the Zombie Stomper Platforms a few months ago (seriously, that's what they're called), and have found only one occasion to wear them so far. Then again, it's also been winter in Chicago, and that's not the best time to go running around the city in open-toed platforms. The Wolfbeater Platform I found online and ordered immediately, terrified they wouldn't have my size or there would suddenly be a run on shoes with bloody teeth on the top.

While I haven't really been able to justify wearing either of these shoes to the office, I am sure they will come in handy two or three times this summer when I go out to non-conservative, non-family events.

Both shoes are made by Iron Fist, and the sizing is a little odd. They run about a half size too big, but don't come in half sizes, so you have to either figure out how to fill that half size with inserts or something, or go my preferred route and jam your foot into the smaller size and ignore the pain.

As a quick side note, I have also been told I have freakishly small toes, so a smaller size works fine for me. It may not work so well if you have normal feet, or long monkey toes.

And for those of you who care, the shoes are also noted as being vegan, which would be fines, except that I don't care if my shoes are leather or not as long as they're cute. Vegan is also just a really nice way of saying they're plastic, but really, what would you expect from shoes that have bloody teeth and eyes on them. I don't care what they are, I just call it love.