July 02, 2010
My younger sister, Figgy (not her real name), and I try to do something good for ourselves once a week, so we attend a yoga classes, then grab dinner for sister chat.

Last night was no different, except I also found a way to get free booze involved. Enter a t-shirt release party.

Chicago Designer Anna Hovet released her new Signature Tee collection, and in an effort to support local designers and get a free glass of wine, we decided to stop there on the way to dinner after yoga. Plus it was literally around the corner from me at Black Market Cavier, which I had not gone into yet because I was afraid of finding cute things and spending all my money.

Of course we had to change after yoga class. You don't think I'd go to a t-shirt release party in yoga pants and flip flops, do you? So we stopped home to change, touch up the makeup, and make ourselves a little more presentable.

I rocked a pair of leggings and gladiator heels (not sandals), and we traipsed over there to look ridiculous among wannabes and those who fancy themselves to be quite hip (we probably fall into the latter category). 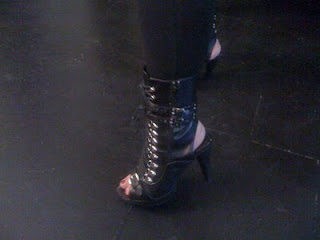 It should also be noted that Figgy wore a shirt that had a bunny on it, but that's a separate story entirely.

Once we got there I went through the racks of clothes, and found a jacket I am now coveting (and I know exactly what shoes I'll buy when I get it). Figgy actually got a shirt by the designer, which says "Keep trying, I'm worth it," in Norwegian and has a hand drawn image of a girl carrying balloons.

Very cute. It makes me think of Nena and "99 Luftballons." And it's a step up from the bunny shirt in my opinion.

Now she just needs to find the Norwegian part of the city for anyone to know what the shirt says. And yes, I made her take a picture of my shoes. Because nothing says t-shirts like a pair of heeled gladiator shoes covered in silver hardware.

sienasimmons said…
It is very interesting and nice article that you have created and you have such a nice sense for creating blog and articles and people can attract towards your blog.
yoga clothing
July 5, 2010 at 2:44 AM