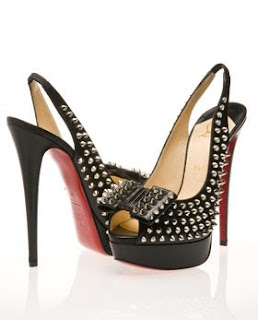 At least I don't think so. I have to go raid my closet, but I'm almost positive that I don't have one pair of shoes that is adorned with spikes or studs. I have clothes that fit that category, but I think as far as shoes go the closest I get is a bunch of buckles or hardware.

Christian Louboutin has an amazing pair of heels that not only have studs, but also bows, which are covered in studs. The Clou Noeud Spikes.

I only own polka dot shoes with bows. Two pair actually, and they're disappointingly less lethal than Louboutin's shoe. I guess I could beat someone to death with them, but I can't stab them with the cute little bows.

Today it was also announced that Ruthie Davis' will be coming to Neiman Marcus (which is great if you don't have a boutique that sells her stuff in your area). The shoe they advertised this new with was so great it prompted a mid-afternoon Facebook post, and some general designer obsessing. (Really, I love every shoe on her website). The picture was a 5" Swarovski Crystal and spike spike heel with a covered platform bootie. Who doesn't need that?

I don't even own a bootie or ankle boot anymore. I used to, but I got tired of them so I threw them out, or sold them. Something. It doesn't matter. They were black, and dull. They were not covered in the fabulousness that Davis and Louboutin have been creating and torturing me with. They didn't have bows, sparkles, peep toes or anything!

Stupid boots. No wonder I got rid of them. They were an obviously inferior shoe.

I'm not entirely sure of the proper occasion to wear the a fore mentioned metal adorned shoes, but I am sure I can find one. Or five. Hell, if I had those shoes I would wear them to vacuum, dust and do dishes. Not that I generally do any those things, but if my fiancee is reading, maybe he'll buy them for me in the hopes I will (but I won't).

In reality I'd probably just wear them while I boss around the cleaning lady (which I also don't have) and drink martinis.

OK, I'd just wear them while drinking martinis. That's the only part of the whole scenario that's realistic.

soilder4peace said…
ive got over 100 pairs, i love your blog, please check my blog out