April 26, 2010
You would think that as someone who has worked and planned events for a number of years, I would have at some point given in to comfortable shoes.

Well, I haven't. I kind of tried it once with a low, chunky heeled loafer for a conference, but my feet hurt anyway, so I got rid of them (or they're rotting in my closet, I forget). I don't care what anyone says; running around hotels, or other sites in any shoes, tall or flat, for eighteen hours a day for three to five days straight makes your feet hurt no matter what. The trick I've learned is to wear different shoes every day. This serves two purposes:
1. Creates more luggage than seems necessary because there's a whole separate bag of shoes.
2. It changes the angle of your foot daily so the pressure is redistributed and your feet hurt less.

Since it's once again conference season, friends of mine are breaking out the rarely used suits, digging up "conference shoes" and bracing for days or weeks of foot pain, while griping about dry cleaning bills, figuring out how you can not get everything wrinkled in the suitcase, and trading tips on how to still look human on day four of the conference when your face is frozen into a smile, and you haven't slept well because you keep panicking over details, and you've been eating like crap for days. As if that's not bad enough, a friend recently sent me this picture. 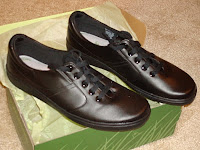 Dear God, what the hell are those?!

Apparently her job hates her and all the other people who work their conference, and they make the staff wear those things with their "conference uniform" (which is a shame because she owns some kick ass suits). Sure, they're probably approved by some podiatrists' association, but that can't make up for the fact that they're the ugliest damn shoes I've seen in a while. They're made by a company called Grasshoppers, and I'm pretty sure they're the most unattractive shoes in their catalog. 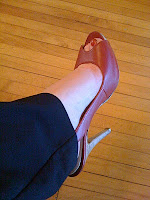 Last weekend I worked a meeting at a hotel for my job, and just trekking all over the massive hotel in and out of meeting rooms, standing and sitting, running in heels to get copies made ASAP, made my feet hurt. Then again, I chose especially poorly, figuring (incorrectly) that since the meeting was in only two rooms there wouldn't be a lot of walking. So by Friday night my feet hurt, and I had worn stupid shoes, but at least I looked good.

Sure Deb may get a a tax write off, but no amount of tax write-off can make having to own these (let alone wear them) any better.

I'll take red slingbacks and sore feet over those any day.